Dr. Cindie Luhman puts it simply: cattle producers have a problem — “A, my animals face health challenges. B, I can’t use antibiotics anymore. How do I solve that?”
Dr. Luhman runs the Purina Animal Nutrition Center, a 1,200-acre working farm in Gray Summit, Missouri, devoted to research in animal metabolism, growth and development. Research insights from the Center drive the development of new products and nutrition programs for show animals, performance animals, livestock and more. (Much more, in fact -- we bet you didn’t know we also develop feed for conservation efforts of exotic animals around the globe.)
For more than 125 years, Purina has been, and continues to be, on the leading edge of nutrition programs for different species, life stages and roles. Now, Purina leads the industry by approaching animal nutrition in a way that mirrors modern human nutrition: focusing on wellness, prevention and the microbiome -- the nearly innumerable microorganisms living in an animal that support all sorts of healthy functioning.
This focus on whole-animal wellness before disease strikes is crucial. When an animal does fall ill, producers spend time and money on treatment and may have to use antibiotics to help the animal recuperate. 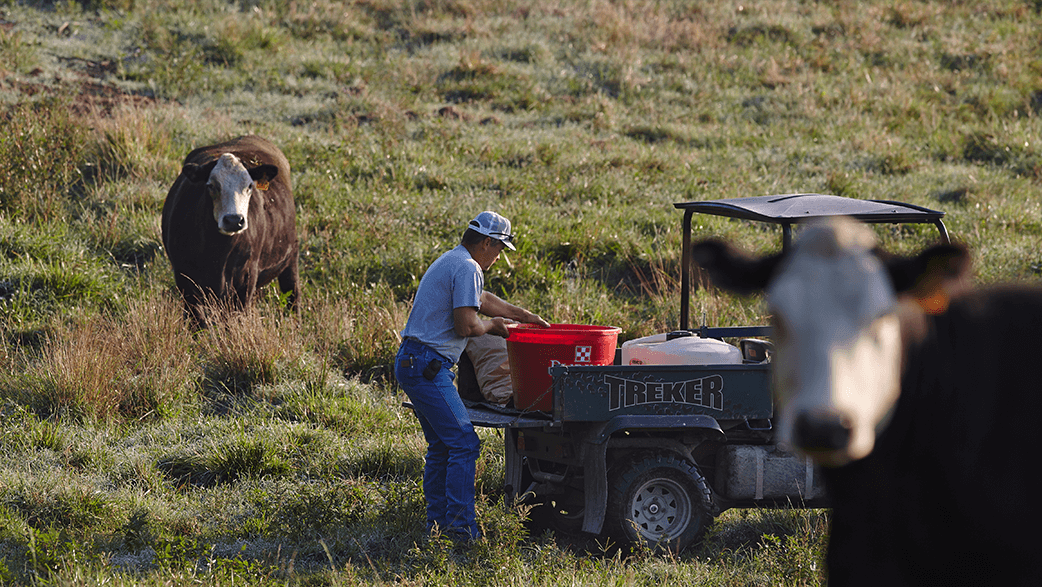 Dr. Ron Scott, who directs beef technical innovation at Purina, sees a trend occurring in the U.S., in which consumers don’t want to consume meat from animals that have received antibiotics. It echoes sentiment -- and legislation -- that has already occurred in other parts of the world.
Fortunately, Dr. Scott’s team works to develop and deploy solutions for livestock agriculture both now and in the future. In the case of one recent development, called RX3 Immune Support Technology, his team has tapped into the science of gut health to deliver a win for producers who want to help prevent health challenges and consumers who are increasingly seeking to avoid antibiotics in the food they eat.
As Dr. Luhman describes, RX3 “has been shown to help an animal’s immune system kick start when they’re faced with these respiratory challenges...it helps them to get better faster.”
It starts with cows’ gut microbiome, which contains more than a quadrillion microbe -- bacteria, fungi and viruses -- that play a critical role in metabolic function, including immunity. Purina developed a process to discover how various components in the gut affect the immune system in different ways: How does each component affect white blood cells function? How does each affect the way an animal fights fever?
Dr. Luhman explains, “So you sort of have a library. Then you can pull those types of compounds into a package.”
Adds Dr. Scott, “if you combine those at the right amount, and the right ratios, you can change the world.” 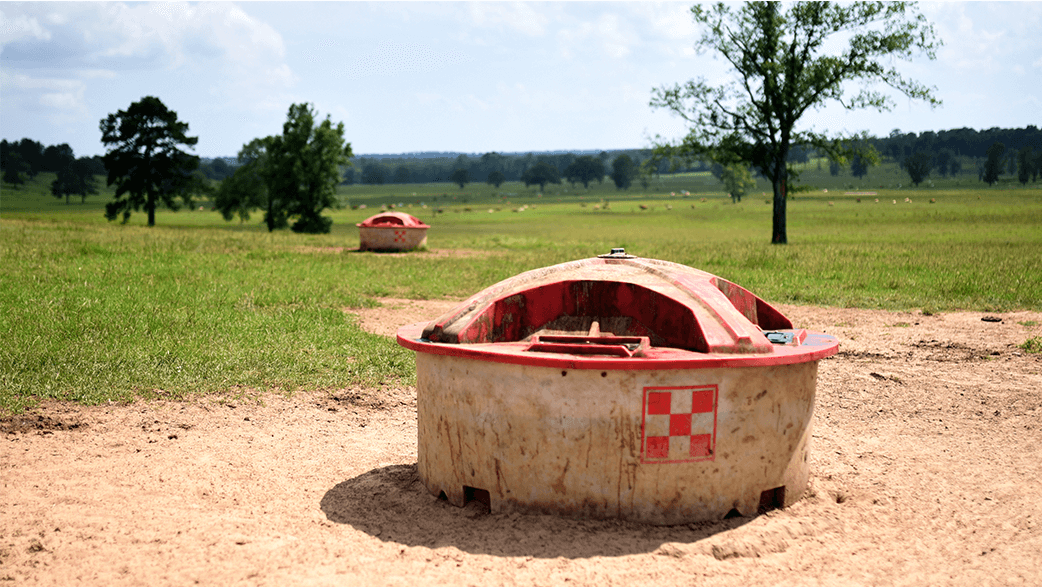 Launched in July 2019, RX3 represents that combination. RX3 Immune Support Technology is a multi-component feed additive. It’s ingredients include prebiotics, probiotics and plant extracts that prime a calf’s immune system to support overall health. While not a medication for cattle that are already sick, RX3 stimulates calves’ immune response, essentially, helping them to recognize challenges sooner, respond appropriately and return to optimal health.
Dr. Scott’s team developed the formula with calf respiratory health challenges top of mind. One of every five calves are affected by respiratory challenges.1 And bovine respiratory disease takes a toll on farmers, costing the beef industry about $1 billion a year.2,3 Respiratory challenges have long been prevalent in the cattle industry, in part because cattle have very small lungs relative to their body size. Calves are affected in particular, because weaning can be a demanding time for calves whose immune systems aren’t fully developed.
Dr. Scott explains, “Stress can affect the immune system for both people and cattle. It’s a lot like when you go to college. You have to learn to live at a different place, meet new friends -- those stressors affect cattle too. During transition times, calves have higher maintenance requirements, and they don’t eat very well. When they don’t eat well, the immune system becomes compromised, and they can become sick.”
Over the years, Purina has developed feeding programs to help ensure that weaning calves consume a well-balanced diet with the right nutrition.
“So, we knew how to do that,” says Dr. Scott. “But our next step was identifying what we could add to the diet to give those calves an extra boost to help support their immune system.” Which is not unlike how a human immune system works. 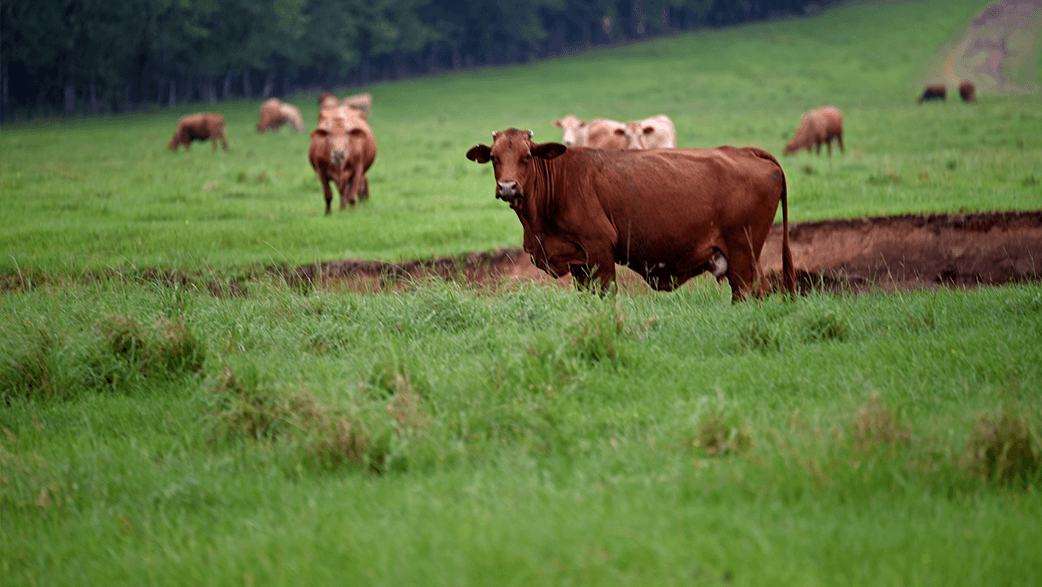 Over the course of four years, Purina tested natural, probiotic and prebiotic ingredients and inventoried how combinations influenced positive health outcomes for cattle. However, to pull off RX3, they would need external researchers too, to replicate their studies and validate their findings.
Purina worked with researchers at the University of Minnesota and North Dakota State University and with the USDA Agricultural Research Service team in Lubbock, TX, where their facility has unique capabilities to measure cattle’s immune response.
“We want replicable work. So that when we say something’s going to work, it’s going to work. When we found out that the data collected by the universities and USDA matched up with our studies here, we knew we had something,” says Dr. Scott. In fact, Purina’s research was supported by seven different studies.
Study results demonstrated that calves fed Purina starter feeds with RX3 were healthier overall and were able to gain more weight compared to the control group4 -- a critical indicator of the calves’ overall health and ability to fend off disease.
Healthier calves also help minimize costs for producers, saving the producer $30 per sick calf, considering the costs of time and potential antibiotic treatment. When beef cattle farmers can proactively support their calves’ response to health challenges, it means they can invest less in reacting to health challenges.
“Respiratory challenges have been here forever. What we have today that we didn’t have 20 years ago is the science,” says Dr. Scott, adding that there’s more still to discover. “Whenever we do research, we open up a door that nobody knew was there. Now because of it, we can do more.”
Part of the reason RX3 is so promising is because it opens doors for similar solutions with dairy cattle and more species and cements Purina Animal Nutrition as a powerhouse in innovation.
More than 125 years ago, Purina was founded on the belief in innovation’s ability to solve animal owners’ greatest challenges. This new RX3 technology represents a new era for beef. Just as the formula proactively supports calf immunity before illness strikes, the research behind it proactively addresses a major industry concern: the move away from antibiotics, advancing natural ingredients and addressing whole-animal wellness and sustainability.

Here's how data is advancing agriculture -- near and far

Truterra, the engine set on being the solution to more sustainable agriculture