If you could control the weather, what would you learn?

The latest technology at the WinField United Innovation Center creates the conditions to help growers and retailers learn more, faster 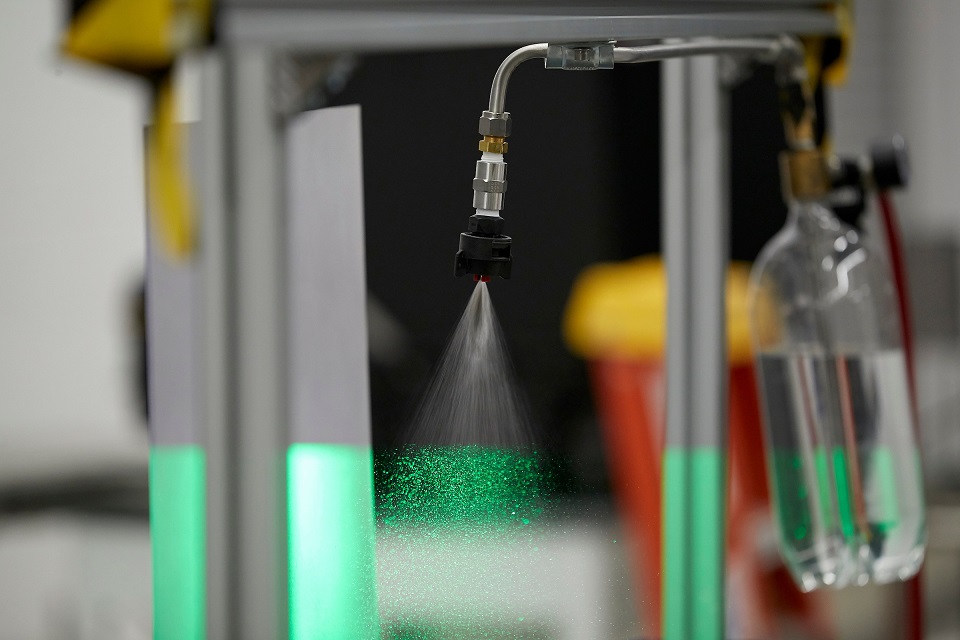 About halfway into the virtual tour of the WinField United Innovation Center, sightseers pass a red and white sign which reads, “LASER IN USE,” before entering its state-of-the-art Wind Tunnel Lab.

Since 2007, the lab’s researchers have used lasers combined with high-speed photography to study active ingredients in spray applications. This research, conducted using the Spray Tech 1 wind tunnel, helps WinField United’s network of retailers recommend more efficient, effective, and sustainable sprays for growers. In spring 2021, the lab finalized construction on a new wind tunnel, called Spray Tech 2, which has the ability to not just study droplets in the lab, but to actually mimic field conditions in a way no other lab in the world can. This enables the researchers to study spray applications’ behavior in real-world settings.

“We’re not just measuring droplet size, we’re capturing them and tracking their path,” said Elizabeth Alonzi, a research engineer in the Wind Tunnel Lab and day-to-day technician on Spray Tech 2. “It’s what sets Spray Tech 2 apart from other tools or in-field tests, and helps us learn faster on behalf of retailers and growers.”

Technically, WinField United has always researched spray application behavior, just never as precisely or efficiently as researchers can now. Historically at its location in Wisconsin, researchers could only conduct trials outdoors and in the summer, which already poses a problem to year-round learning. Even in the appropriate months, researchers would have to wait several days for the weather to cooperate with trials.

“When you are trying to conduct these trials in the field, there are many barriers to collecting the data,” Elizabeth explained, “You go out when you think it might be a good day to test your variable. Then, even if the weather does match the conditions for testing, you have to work as fast as you can before the conditions change. And as everyone knows, you can’t control the weather.”

The two-story Spray Tech 2 allows researchers to replicate true-to-life field conditions for any region, nearly any wind condition, and even for aerial application.

The bottom level mirrors ground applications. It can replicate wind speeds up to 40 miles per hour, which covers just about any ground-level weather event. It also has interchangeable nozzles to match different tractor spray nozzles, and it can be positioned to study how wind interacts with different spray heights and angles.

The upper chamber mirrors aerial application, with wind speeds reaching up to 160 miles per hour. Here, researchers can investigate sprays that are typically applied via plane, such as fungicides or applications for very tall crops. It is hard to believe that the chamber can push out tornado-speed winds when you consider it sits across the hall from the conference rooms and chemistry labs in the Innovation Center — where you wouldn’t hear or feel a thing.


The two parts of Spray Tech 2 offer a level of control that Elizabeth said is crucial for testing, especially when it comes to adjuvants. “You don’t want those droplets being carried off-target by the wind,” she said. “Once we know what the lifecycle of the droplet looks like in real-life conditions, we can make product recommendations designed to prevent drift, so product doesn’t end up anywhere it doesn’t need to be.”

Research that stems from real life

Everything the WinField United Innovation Center does is to advance agriculture intelligently and improve growers’ ROI. So, when it comes to deciding what problems to research with Spray Tech 2, teams turn to three parts of WinField United’s vast network.

First, there are the WinField United agronomists, who are deeply aware of and connected to the challenges growers face for specific crops in specific regions and seasons; they uplift some of the toughest challenges that different regional retailers and growers face. Then, there are WinField United’s sales representatives, who provide a voice around what’s missing in current product portfolios. Third, the scientists who work at the Innovation Center brainstorm ideas for experiments coming from previous trials.

“It’s a little like a boutique research firm in that sense,” said Elizabeth. “We also have the agility to build what we need for a new experiment. If we have a research question, but we don’t have the tools to answer it in the lab, we’ll build it.”

This tailored research style has been streamlined with the use of a 3D printer in the lab. Printing parts for Spray Tech 2 has been more cost-effective than fabricating parts from steel — and much faster, given pandemic-related manufacturing supply chain disruptions.

Spray Tech 2 has been operational since March 2021, mainly focused on replicating in-field trials, so the researchers can confirm results of previous trials. In today’s world, that certainty is critical. It helps give growers confidence that every droplet of spray is going to get utilized, and that it’s not ending up in neighboring fields.

“At the end of the day, it’s all about what we’re giving back to our owners,” said Elizabeth. “The goal is to get more information on the products we develop to our agronomists — beyond just how a product performs, but also how it works in what conditions and when it works best, so we have more certainty about how it will work in the field.”