Why you should listen to "The Deal With Yield" podcast 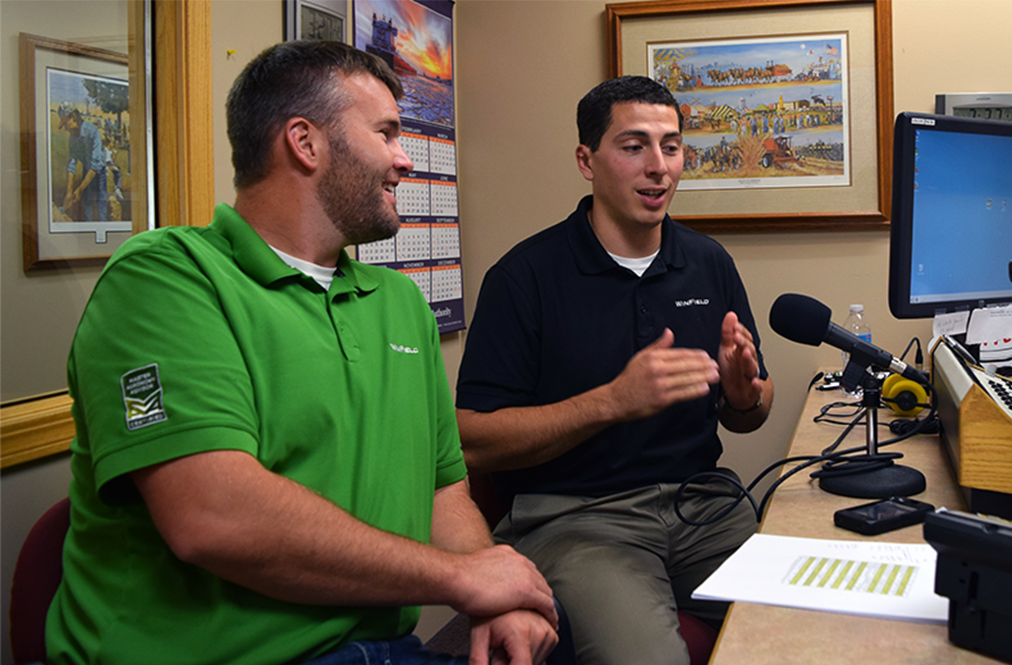 If you're a fan of podcasts, you know that there's one for nearly every interest you can think of: science, technology, sports, the arts, business and so many more. But how many shows in the vast podcast universe can say they compare corn rootworms to zombie movies?

WinField United's "The Deal With Yield®" podcast can. Each week, hosts Joel Wipperfurth, ag technology applications lead, and Kyle Reiner, master agronomy advisor, share their expertise on topics that matter most to farmers—seed selection, alfalfa management and weed control, to name a few.

"When we launched [in 2015], we weren't aware of anyone using podcasting as a medium to communicate to growers and retailers," says Joel.

The team saw that gap as an opportunity to strengthen our position as an industry thought leader. Joel was picked because he not only is very knowledgeable in agronomy and ag technology, but he has a fun personality and knows how to take technical information and break it down for people.

When pitching the idea of hosting a farming podcast to Joel, they asked if there was someone with whom he had a great dynamic.

Listening to the podcast, you hear that Joel and Kyle have an easy rapport. (If you haven't listened, you should do so. Right now. You can also get it on iTunes.) That chemistry is rooted in a friendship that began many harvests ago, when the duo met at Southwest Minnesota State University.

"He told me to show up and wear a nice collared shirt so I ca​n get an internship," laughs Joel.

"Look where he's at now," Kyle banters. "He's the lead ag technology specialist for the whole company. He owes me."

Joel and Kyle have built their friendship—and careers—together, including an award-winning podcast.

The deal with podcasting

Once a month, Joel, Kyle and Linda Brekke gather at a radio station in southern Minnesota to knock out four episodes (about 15 minutes each) of the podcast. Linda is a familiar voice to many Minnesota farmers, delivering markets and farm news on the Linder Farm Network.

"When I was out in the field on a tractor, Linda was always on," says Kyle. "I told her she's the only person I know who, despite commodity prices being bottomed out for two days in a row, had the same voice of positivity."

Linda typically serves as the moderator of the podcast. They talk about a variety of topics including how corn kernels compare to NFL draft prospects, how weed control is a lot like beard control and why early manure application is like refrigerating a Thanksgiving turkey. And you thought "The Deal with Yield®" podcast would be boring?

Between the colorful analogies and phrases the duo tosses out—including, "Let 'er rip, potato chip"—it's tempting to call their delivery folksy. But, as with everything else WinField United does, there is real science and expertise driving the podcast.

The podcast's foundation is reliable information and advice grounded in data-driven insights and delivered in an engaging way. WinField United bench goes deep and their guests go deep into their areas of specialty. Take Randy Welch, CROPLAN® national alfalfa agronomist, for instance.

"There's nothing Randy Welch doesn't know about alfalfa," Joel says of their occasional guest. "That's what differentiates WinField United in the marketplace—our strong depth of knowledge. Even our salespeople wind up having excellent product expertise because of the culture."

The deal with audiences

Joel and Kyle know there is competition in podcasting for the ag community's ears. But they feel their advantage comes from imbuing their personality into the show as well as the research, agronomic expertise and focus on winning in the field that WinField United brings.

"Competitors are trying to do their own podcasts, but they do it from such a blasé interview standpoint," says Joel. "Having a podcast on its own isn't unique. The other podcasts are missing the 'Click and Clack' dynamic [from NPR's Car Talk radio show] that Kyle and I have."

Their bantering serves a purpose. Besides entertainment, of course.

The podcast audience is mostly made up of growers, retail sellers, crop consultants, agronomists and WinField United employees. People listen in their tractors, their pickup trucks and cars, and even at their desks.

"On occasion, I'll get an employee coming up to me saying, 'Hey, I listen to the podcast. I don't work in agronomy, but the way you guys talk about it helps me understand how the business works,'" says Joel.

Joel and Kyle are also finding success expanding into other online media by broadcasting live on Facebook. Their latest livestream garnered a total of 5,200 views, with an organic engagement rate of 18 percent, well above the average rate of 1 percent. (Engagement refers to actions such as likes, comments, shares and link clicks.)

"My relatives even watched it," says Kyle with a laugh.

The deal with awards

"The Deal With Yield®" is not only winning the hearts of its listeners; it's winning awards, too. In February, it won an In2 SABRE award in the Audio: Podcast + Music category. This is a national award from the Holmes Report, a PR trade publication, and is part of the PR industry's largest awards program honoring innovation and creativity.

Just last month, "The Deal With Yield®" was awarded first place at the 2017 Minnesota PRSA Classics Awards in the Multimedia category for a second year in a row.

Despite the rising number of downloads, the awards and being the number one downloaded podcast on My Farm Radio, Joel and Kyle haven't let the stardom go to their heads.

"We aren't the experts; we just hang around some pretty cool and knowledgeable people," says Kyle. "We're here today because we have strong people around us."